BATTERED
not broken
by CHARITY WEST 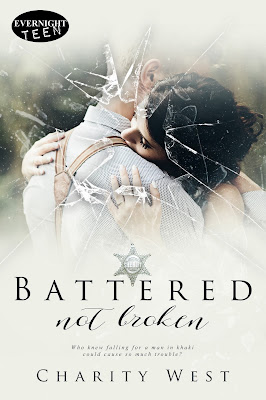 Who knew falling for a man in Khaki could cause so much trouble?

Battered and bruised, Wren has taken a lot from her father over the years, but when he throws her out of the house, she sees it as a blessing in disguise. She has no job, no home, and never finished high school, but what’s all that compared to a life without abuse? When she starts over in a new town, under a new identity, she makes it her goal to fly under the radar.

New town, new life. Only, there’s a corrupt deputy intent on stealing Deputy Gray Frampton’s family fortune, a slight case of aggravated identity fraud, and a night in the local jail. It’s enough to make any girl’s head spin. Wren Michaels has to find a way not to spend the next three years in jail, warn Gray that Deputy Pritchard is after him, and somehow hold onto the happily-ever-after that is finally within her grasp—assuming Gray wants a felon as his girlfriend. Who knew falling for a man in khaki could cause so much trouble?


Charity West is a young adult romance author who has always had her head in the clouds. She had her first crush when she was four, and it lasted for six years. Then she quickly fell head over heels for another boy, until she had to move away and leave him behind. Jumping from one boy to another, she finally found a keeper when she was twenty, and she’s been married to him ever since.


By the time Charity was twelve, she was sneaking her mother’s Harlequin romances and reading them in secret when she was supposed to be asleep. Teased throughout middle school and high school for the bodice ripper covers on the books she openly read in class, she knew that one day she wanted to write her own happily-ever-afters.

a Rafflecopter giveaway
Posted by Krista Ames at 12:22 AM